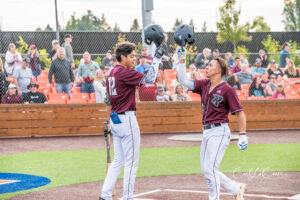 After an offensive outburst to begin the 2022 season against Cowlitz, the Ridgefield Raptors open West Coast League action Friday night at 6:35 p.m. at home against the Walla Walla Sweets.

The Raptors now face Walla Walla in the first WCL series of the year; Ridgefield finished the regular season last year against the Sweets. Ridgefield won two of three on the road, making the playoffs by a tiebreaker.

After the three-game series, Ridgefield heads to Canada for two series that begins Tuesday in Kelowna.

Tune in to all Ridgefield Raptors games at RidgefieldRaptors.com and find tickets at the same site as well!