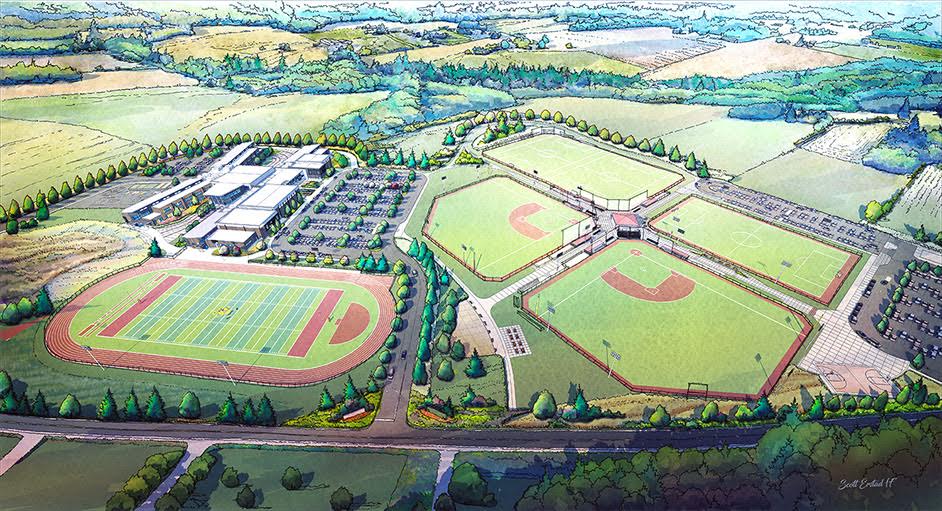 Ridgefield Outdoor Sports Complex, a joint project between the city and Ridgefield School District, which will feature six multi-purpose turf fields, trails, a playground and meeting space. The complex will now be the summer home to a summer team in the West Coast League, a collegiate wood-bat league. (City of Ridgefield)

The West Coast League is expanding to Ridgefield beginning in the spring, the city announced Thursday, which will make it Clark County’s first collegiate wood-bat baseball team since 2007.

Approved unanimously by the Ridgefield City Council last week, the team will play at the forthcoming Ridgefield Outdoor Recreation Complex, a 53-acre sporting facility that is under construction and set to be complete in September.

The WCL is a college developmental league that plays from June until mid-August.

“The league was especially interested because obviously Southwest Washington is a great market with Vancouver and the surrounding communities growing as fast as they are,” league commissioner Rob Neyer said.

Added Tony Bonacci, the expansion team owner: “(Ridgefield) is right in the middle of our footprint; it’s such a great fit.”

Neyer, an author and longtime baseball journalist, began as WCL commissioner May 1 and said the league has been looking to expand. He believes the greater Portland area and Southwest Washington can “easily” support two West Coast League baseball teams — and figures the move will create somewhat of a rivalry.

“There’s always interest from cities all over the Northwest,” Neyer said. “It really becomes a question of does someone have the money to buy a new team, do they have the money to support that team, if there’s a lean year or years, is there a new ballpark?”

Clark County has had players in the West Coast League since it was founded in 2005. Former Skyview standouts Daniel Copeland, a right-handed pitcher and Gonzaga commit, and Brody Barnum currently play for the WCL’s Portland Pickles, along with former Columbia River standout Jace McKinney.

“As a league in a general way, the more league games you play, the more legitimacy you have, whether that’s fair or not,” Neyer said.

The league was formed in 2005 and had seven teams. Since then, it has fielded as many as 12 teams from Oregon, Washington and British Columbia.

“This doesn’t come together if the demand wasn’t there,” Stuart said. “That demand comes from across Clark County. All the other cities have been a part of this happening.”

According to Bonacci, the team will go through a naming process toward the end of the summer that will lean on community feedback.

The complex was promised to residents as part of the Ridgefield School District’s $78 million bond, which residents passed with in February 2017. No bond money is going toward the actual complex, which is a joint effort between the school district and city.

Funding for the estimated $20 million complex will be paid for by the city using a combination of Park Impact Fees, Real Estate Excise Tax, grants, sponsorships and a $10 million councilmanic bond, which is one issued by city councilors that is not voted on by residents and doesn’t raise property taxes.

The complex will be used by the district and will also be open to residents.

The stadium field, which will be used by Ridgefield High School’s baseball team in the spring, will seat nearly 2,000 people, Stuart said, adding that there is room for up to 2,500 there, if needed. He said the average attendance at West Coast League games is about 1,000 people.

Stuart said the league won’t interfere with any other events planned for the complex. He said that the players will be living in the community during the season, attending camps for kids and showing them where athletics can possible take them.

The agreement between the team and city is for a 10-year lease for use of the field between June 1 through Aug. 31 for approximately 30 home games each summer, with the possibility of two possible five-year extensions included. The team will give the city a $100,000 capital contribution, which will be used toward construction costs, and will pay a $6,000 annual user fee for the complex.

The team will also give the city and school district 10 tickets to every home game to distribute out to residents.

The last time Clark County flirted with bringing in a baseball team was in 2011, when owners of the Yakima Bears, a Class A affiliate of the Arizona Diamondbacks, expressed interest in moving to Vancouver. Owners of the Bears proposed building a 3,500 seat stadium that would also be used by Clark College teams and community squads, according to Columbian archives.

The team and the county could not come to an agreement regarding financing of the project, according to Columbian archives. The team instead located in Hillsboro, Ore., as the Hillsboro Hops.

Stuart, who was on the county commission when discussions with the Yakima group were taking place, said the West Coast League team is similar in age and level of play to a Class A professional affiliate team.

He said that since the last team didn’t work out, the demand for baseball in the region has grown. The city’s press release about the team included signatures of support from Clark County Council Chair Marc Boldt and the mayors of all other municipalities in the county.

“This isn’t Ridgefield’s team,” Stuart said. “This is the region’s team.”

In 2007, a collegiate wood-bat team called the Vancouver Flyers played for one season in the Northwest Summer Collegiate Baseball League, with its home games at Clark College and Propstra Stadium.

There’s always interest from cities all over the Northwest,” Neyer said. “It really becomes a question of does someone have the money to buy a new team, do they have the money to support that team, if there’s a lean year or years, is there a new ballpark?
Baseball
share